It really does make perfect sense to me that people randomly break into song on a moments notice. Everyone sings and dances with precision choreography and then just as quickly they go back to whatever they were doing. 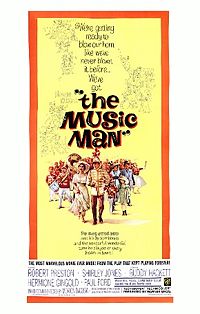 One of my favorites has always been The Music Man with the lovable – and a bit smarmy – Professor Harold Hill.

If you’re not familiar, run to the video store and spend a few hours with the fabulous Robert Preston and Shirley Jones – and a very young and adorable Ron Howard. In a nutshell, a traveling band instrument salesman swings into a small town trying to sell his wares. He knows nothing about actually playing the instruments, but convinces the local children – and their parents – to spend money with him on instruments that no one in town can teach them to play.

But that’s OK because, according to Prof. Hill, they all will be just fine and learn to play fabulously if they’ll just use “the think system” to learn the instruments.

Of course there are missteps, much comedy insues, life lessons are learned, and all works out in the end (it is a movie after all).

But Prof. Hill was on to something. The THINK System does exist and needs a more prominent place within our leadership development processes.

Sports psychologists have long said that athletes who visualize themselves successfully competing perform better than those who don’t.

Millions of dollars and hours of time have recently been spent on The Law of Attraction and visualizing peak performance and goals achieved and more.

I know those things, but I hadn’t personally experienced them.

Until, I learned one of the most important coaching and mentoring lessons of my (relatively) young career sitting on my kitchen linoleum with my then 7-year-old daughter in my lap trying to help her understand that she really is “a fabulous speller” … and … that she has to believe she is before she ever will be. And then came the sentence I wasn’t expecting to say, “haven’t I ever told you about the think system?”

(Well of course I hadn’t, I was just making it up as I went along.)

Well, I said, the THINK System goes like this:

Try your best.
Have a GREAT attitude.
I can.
Nothing is too great.
Knowledge is power.

Whether your 7 or 77, leading teams of 100 or yourself, making the decision to believe in your own abilities – and empowering others to believe in theirs – is a leadership skill we all need to remember.

I’m guessing when they wrote the Music Man Meredith Wilson and Marion Hargrove didn’t sit down to write a leadership development program, but in a musical-theater sort of way Professor Harold Hill is an excellent example of an effective leader.

Does he have room for improvement? Of course. But don’t we all!