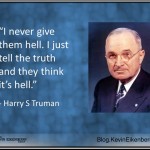 Today’s quotation comes from a man who became President first by not being elected (when Franklin Roosevelt died) and remained after most thought he wouldn’t win re-election.  In this quotation he talks about how he feels his behavior was mis-perceived. I think it has application for us, which is why I share it with you […]