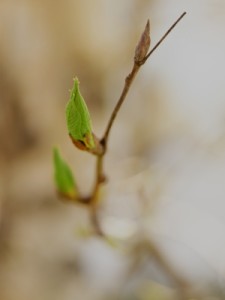 I was waiting for a workshop to begin this week in Kansas City, Missouri when I looked out the window at a tree that was just starting to bud. Except for the small branch right up against the window, which was far beyond budding – it was in full bloom. Picture it – a full tree just turning green, except one small part, maybe six inches of one branch against a window that is full of white blossoms.

That is a microclimate.

We all know what climate is – and it is different in Kansas City than in Kuala Lumpur. We know that and expect that. Yet there is far more nuance to climate than average temperatures and amount of rainfall.

The microclimate is a local atmospheric zone where the climate differs from the surrounding area. The term may refer to areas as small as a few square feet (for example a garden bed) or as large as many square miles. Microclimates exist, for example, near bodies of water which may cool the local atmosphere, or in heavily urban areas where brick, concrete, and asphalt absorb the sun’s energy, heat up, and re-radiate that heat to the ambient air: the resulting urban heat island is a kind of microclimate. Microclimates can be found in most places.

So there is a climate in Kansas City, and there is a microclimate for that tree right next to the window.

What is the point?

And that is the point for each of us. We can change the culture right around us – call it your microculture.

The culture of the whole organization isn’t and doesn’t have to be the same. Your office, your department, your team already has a microculture – the nuances and differences in how you do things and what is important. Since it already exists, we as leaders can influence it – and that is the important thing for each of us to remember.

Now that you see the point, you might be asking how you can do it. Here are four steps to get you started.

Realize you can influence it. Hopefully I’ve already convinced you of that. And if I haven’t, the rest of this won’t matter anyway.

Determine what is important. Think about what you want your culture to look like. How do you want people to work together and treat each other and Customers? What energy do you want in the workplace? What are the most important things you want people to remember, do and live? Once you have this clear picture you are ready to create your microculture.

Live it (everyday). You know the phrase think global and act local? It applies here – at the most local level – with you. Start thinking, acting and talking about the workplace you want to create. Do you want people to be friendlier? Be friendly. Do you want people to focus on Customers more? Do it yourself. Your example is the place you must start.

Nurture it in others. Your example will be doing this in part, but beyond that, think about how you can encourage this in others. Talk about the mindset and behaviors that will create and support your microculture.

Rather than lamenting the culture in which you work, be the window and proactively change it right around you. When you take the steps listed above you can do that – you can make a difference – your culture will begin to shift.

The good news is that culture, unlike climate, can be influenced (and changed) by microcultures; and when they are seen as valuable or beneficial they will, over time, influence organization as a whole.

It all starts with you.

Hooked: How to Build Habit-Forming Products

By Nir Eyal with Ryan Hoover Here is part of this book’s description from the back cover: Hooked is a...