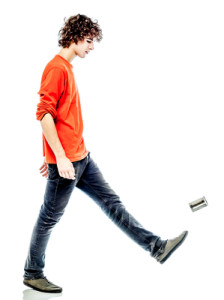 I don’t often (ok, basically never) write about politics or the political system, except to look for lessons we can learn from what our leaders are doing (or not doing).

I’ll get to the lesson, but first, the frustration most all of us share.

Why can’t our Congress and our President get along? I mean, we have serious issues facing us as a nation and they just keep kicking issues further out on the calendar, like a little boy kicks a dented can down the sidewalk.

I know that this isn’t the first time in history that these sorts of things have happened, and I understand the political gamesmanship that is going on, and yet, nothing seems to get resolved . . .

Do you notice when progress is made?

It is when our lawmakers get together over dinner, coffee, golf, or in some other informal setting. In those times, they are able to strip out the extraneous stuff and make progress. Why is that when progress is made?  Because then they are actually talking to each other.

If you want to solve a problem of any size, you won’t solve it by sending notes through others (we did this in grade school, our leaders do it too – through the media). We solve rifts, reduce conflict, and learn things when we sit down and talk. (Tweet this) Face to face, one on one, agendas and posturing dropped.

I believe our lawmakers are smart people. I believe that, in most cases, they like each other on a personal level. And I know that when those facts shine through, people can work on hard problems and make progress.

And this problem doesn’t only exist in Washington, D.C., or only in the political arena.

Departments have rifts. Communication happens by email and problems don’t resolved (or get escalated).

Don’t just shake your head at Congress and the President, then go to work and do the same thing.

You have hard problems in your business environment. They may not be as complex or public as those Congress deals with, but your solutions will come in the same ways theirs will.

Get to know the people in those other departments better. Learn more about their goals and objectives, yes, but also about their families, hobbies, and passions. Don’t see them as a roadblock, or worse, as the enemy; see what they really are: colleagues whom we can help and with whom we can work to make real progress.

Sit down with them, build relationships, and work together to find solutions. When Congress does it, it works.  It will work for you too.

Are you making this costly leadership mistake? You've definitely seen it before and likely even made it yourself. And building...