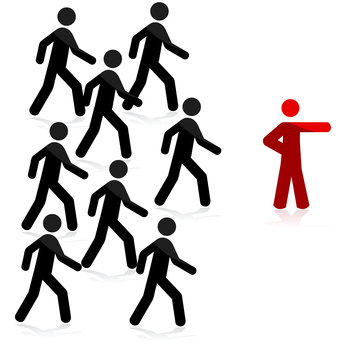 Any discussion of great leaders will include the cliché that the best leaders lead by example. Stated in conversation, everyone will nod and agree. And if you are reflecting personally on the attributes of those you have willingly followed, you will find that common trait too. It seems there is little doubt that we influence others through our actions, especially when we are in a leadership role.

The challenge is that it isn’t just great leaders who are leading by example – we all are. As a leader/supervisor/manager, people are watching us. They are noticing everything we do – whether it is what we would want them to emulate . . . or not.

Since people are watching and are being influenced by our behavior, for better or worse, it begs a (very) important question.

What is the example we want to be setting?

This might seem like a simple question, but I have found that in practice, it isn’t quite that clear; and even when it is clear, it isn’t all that easy. If your vision of “leading by example” is creating some sort of cadre of mini versions of yourself, you are misguided. It won’t really create the results you desire, even if your behaviors are fully worthy of being followed (besides it is creepy in a b-movie science fiction kind of way).

What “leading by example” should mean is that our actions influence others to behave and respond in ways that we deem valuable and appropriate for our organizational outcomes.

In other words, while we need to focus on our behaviors, it isn’t for ego purposes, but the organization’s benefit.

This is also made more difficult because we have a hard time describing what we really want from others. We talk in high level, vague language that is very difficult to turn into behaviors that can be emulated by others. The hit parade of attributes people say they want in team members includes:

This is a good list, but what do these things really mean as we work each day?

If you can’t answer that question clearly, you can’t “lead by example” because you don’t know what the example is supposed to be.

In other words, if we are going to lead by example in relationship to that list, we need to know what we really mean, and determine what behaviors create those outcomes. To answer the question implied in my title, let’s examine your example as it relates to the five items on the list above.

While I could give you examples of each these ideals, and what the behaviors would be, that ultimately isn’t very helpful to you. Because what these things mean in your organization matter more than what they mean to me. Your ownership of these ideas and behaviors make a difference. So, rather than translating all of these for you, I will give you one example to help you get started.

If you want engagement and empowerment, consider the following behaviors:

While this is just a partial list, it is also my list – how I translate those principles into action. For me, if my team members are engaged and empowered, they are doing these things.

The “lead by example” cliché is a cliché because it is true – people are influenced by our actions. Our life as a leader would be easier if we could say all the right things and know that those words would significantly influence our team. While that would be easier, it is also unrealistic. While our words matter, what we do matters far more. Put another way, others watch our feet more than our lips.

If we want our influence to be positive and productive, we must be clear on what we want from others, and then make sure our actions (as well as our words) support that. When we do this, we are leading by example in an intentional and productive way.