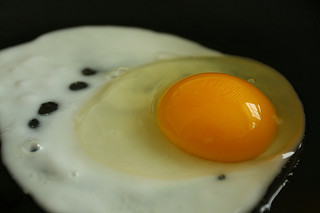 PTFE or polytetrafluoroethylene was discovered on April 6, 1938 by Dr. Roy Plunkett at the DuPont research laboratories and it was patented in February of 1941.

You know PTFE as Teflon – the non-stick coating used on things like pans, griddles and grills. This chemical now has a growing list of uses based on its chemical properties and this discovery has made DuPont a lot of money.

This is all well and good, but you might wonder if there are connections between Teflon and good leaders . . .   I sat down, thought about both things and found these important connections.  Hopefully in my thoughts you will find one or more insights to help you become a more effective leader yourself.

Teflon has a high melting point (well over 600°F), and wouldn’t we expect that to be true of highly effective leaders?  No one wants a leader who is too quick to anger or too quick to “melt down.”  Good leaders are able to stand some heat and pressure and maintain the ability to perform effectively.

For the last 40 years or so the nickname “Teflon” has sometimes been given to a leader in a derisive way – Ronald Reagan was called the Teflon President, and Tony Blair, Teflon Tony – these are just two examples.  This nickname was (and is) given when criticism of them doesn’t seem to stick.  While this nickname isn’t given as a moniker of praise, in a way it could be – as people tend to overlook or look past criticism because of other great strengths, including likeability. Everything else being equal, I’d take that nickname as a leader – it would certainly say you are doing something right.

Of course the thing we most think about Teflon is that it is a non-stick surface.  What can leaders learn from this quality?  Or what things would leaders benefit from not sticking to them?

Criticism.  I’ve already mention this, but it bears repeating.  As leaders we are out front and will face criticism, yet we can’t over-focus on it. If we do, we become fearful, timid, indecisive, and necessarily ineffective.

Mistakes.  While we should learn from mistakes, we can’t let the residual stick to us.  If we focus too long on our mistakes, we are less likely to try anything new, and our confidence may be damaged.

Frustration.  Everyone gets frustrated.  And as a leader we are involved in so many different activities and situations that frustration is likely to find us sometimes, but we must move past that frustration to a place of constructive thought and action.

Drama.  Leaders often talk to me about the drama they experience on their teams.  Effective leaders are aware of emotions and situations, yet don’t let that drama stick to them or the decisions they must make.

Conflicts. As a leader there will be times you must deal with conflicts. Your path should be to understand and resolve conflicts, not let them stick around and eat at you, others, relationships, and work success.

Low priority work.  As a leader your plate will always be full, so we must prioritize.  If we let less important work stick around, we may not get to the most valuable tasks on our lists.

All of this is true, and should be kept in balance, which leads us to . . .

I’m sure you have heard it . . . If nothing ever sticks to Teflon, how do they make Teflon stick to the pan?

I don’t know the answer to that chemically, but it makes an important point about balance for the leader.  While I’ve suggested that the things above shouldn’t “stick” to the leader, it doesn’t mean they won’t experience those things, or that they shouldn’t learn from them.

Think about it – your eggs don’t stick to the Teflon, but the Teflon helps make the eggs.  Teflon works after it has done its job – and we as leaders must do our jobs, learn from things like mistakes, conflict, criticism, drama – not avoid or deny them.

I can make eggs without a Teflon pan, but I don’t really want to – with it my job is faster, easier and less messy.  So it is with great leaders.  People may get some work done without one, but it will be slower, harder, and a lot messier.

It isn’t Ability That is Missing

I'm drawn to today's quotation, because I believe it is profoundly true.  There might be a more elegant way to say it,...