Some time ago, I was delivering two workshops in Toronto. During the first, there were a couple of comments about professionalism, along the lines of, “I want my people to act like professionals.” Others in the room nodded their heads, and while I considered asking a follow up, clarifying question, I opted to move on with the workshop.

The question I could have asked would have been something like, “And what does professionalism look like?” While I didn’t ask it, I think it is a good question, and one that I received an emphatic answer to later that evening. 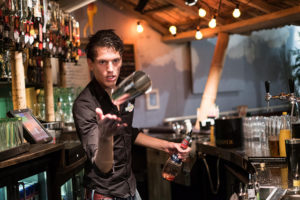 After a full day of training and hosting a teleseminar, I decided I should eat something. So, I walked out of my hotel and towards a building with two restaurants in it. I chose a place called Jack Astor’s. When I walked in, I felt energy and saw happy servers. A young man engaged me, asked me where I wanted to sit, and I told him I’d just sit in the bar. Lucky for me, Karl De Joger, the guy who greeted me, was also the bartender and my server.

Karl was pleasant, thoughtful, and attentive, but he was far more than that. He asked my name, and shook my hand. He offered advice on the plentiful beer selections, especially when I asked about local micro-brews. He answered my questions about the restaurant, its origins as a chain, and more. Compared to many others in his role, I was pleased he knew the history of the business and was willing to talk about it in far more than a “this-is-what-I-remember-from-some-orientation-session” way. At no time did I seem like a chore.

But don’t assume Karl had nothing else to do but serve me!

He conversed with me while managing the orders at the rest of the bar, serving a couple of tables, and managing conversations and orders with all of the other wait staff as well. He did all of this while effortlessly pouring drinks, smiling, cleaning, and doing all of the other things a bartender must do. Everything handled well, never a wasted step or motion.

He didn’t need to say that for me to believe it.

The next evening, I walked in for dinner again. I knew Karl would be there, because he had told me so the night before when he invited me back. While the first night I sat at the end of the bar near where the wait staff came up, the second night I chose the far end, expressly so I could watch Karl. Before I made my way to a seat, he rushed outside the bar and shook my hand, and called me by name. “Welcome back, Kevin!” Because of my selected seat, we spoke less than the first night, but he was still spectacular.

People ask me how I feel about traveling as much as I do. One of the things I dislike about it is eating alone. I’m not sure why, but it is not uncommon for me to eat little, grab fast food, or order room service. This wasn’t the case that week. I couldn’t wait for Wednesday night.

When Wednesday night came, I sat back at my favorite spot, near all the action. Karl playfully wondered why I hadn’t sat there the second night. Back near his hub of activity, I continued to watch him do every part of his job with skill and “flair” (the Jack Astor word for it, he told me). I learned more about his philosophy. He said his father traveled a lot and he decided to not create any of the horror stories his dad shared from his traveling dining stories.

After over three hours of observing Karl (over three separate nights), I can’t think of a part of his job description (and the work that goes beyond the formal descriptions we all write) that he didn’t do with excellence.

Karl De Joger is a bartender. And when I think of professionalism, he is a part of the picture I see.
If you are ever near the Toronto Airport, go to the Jack Astor’s bar and restaurant. And if Karl is there, tell him I said hello.

So what is professionalism? Professionalism stems from an understanding of the importance of one’s work and a belief that doing it well makes a positive difference in the world. Professionalism isn’t a job title, and can be found by people doing any job on the planet.

As leaders, we can support and engage people to move towards higher levels of professionalism, but not until we have a picture of what it looks like – and we share that picture with others.

photo credit: npmeijer via photopin – and it isn’t a picture of Karl.

Create a Challenge and Create Your Future

Think of the times in your life when you have grown the most, excelled at new levels and felt the...