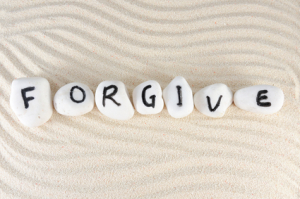 We see it in public gestures like Nelson Mandela forgiving his captors after his long imprisonment or when President Ford pardoned President Nixon.

And we often see the results when there is no forgiveness.

Like in the news every day – from revenge violence to road rage to people arguing about reclining seats on airplanes.

Yes, Mandela and Ford were leaders, but how does forgiveness apply to us as “everyday” leaders?

It applies immediately and directly.

But before I share my thoughts, let’s start with the three types of forgiveness. They are:

As I describe each, I believe the relevance to you both personally and as a leader will become clear.

We all make mistakes. We all exercise poor judgment. We all screw up. It is what we do next that matters most. If, after our mistakes we live in guilt and in the past where the mistake happened, nothing positive will come from it.

It’s considered a universal truth that “we learn from our mistakes”. Yet this “truth” is missing a couple of components – lessons in mistakes are there but the learning isn’t guaranteed, and the learning won’t come if we are living in the mistake, not willing or able to reflect on it, let go of it and forgive ourselves first. A more complete statement of that truth is that “we can learn from our mistakes if we will let ourselves and choose to do so.”

And that learning can’t happen without self-forgiveness.

There are other reasons why self-forgiveness is important, including that it allows us to focus on the future, rather than the past, and it reduces our stress and frustration (and makes us healthier too).

When you read the title of this article, this was probably the type of forgiveness you were thinking of.

Think for a second about how you feel about a person who hasn’t forgiven you. Do you want to be around, work for or with them? Are you willing to give them your best effort? Or does the barrier between you (which can include self-forgiveness too) keep you from moving forward?

When we don’t forgive others, we set ourselves up for animosity, reduced productivity, more conflict and drastically lowered trust.

So how open to forgiving others are you?

Things happen that might not be anyone’s “fault”. Do you know people who continue to dwell on a past situation that caused them grief or pain, even if it was just a situation? When we are able to forgive situations, we are able to let go of those negative feelings and move forward.

Your forgiveness of situations defines how forgiving you tend to be of negative circumstances, events, or situations that are beyond anyone’s control. This would include things like illnesses, natural disasters and the like.

Can you let go of these situations so you can move forward?

If you hear yourself saying lots of “If only . . .” or “If it had just happened that way . . .” type statements, you likely have a ways to go in this area.

When we can forgive, we can move from a past focus to a future focus, which provides us with hope, accountability, and the opportunity for growth and advancement. As long as we (or others, or an entire group) are living in the past, no progress can be made. (Tweet that).

Because error is part of being human, forgiveness allows mistakes, failure, slips ups, errors in judgment and decision making, flaws and other breakdowns to become a source of increased wisdom and learning. Without the forgiveness, the same events and situations create more divisiveness, angst, conflict and discord.

The best leaders use the practice of forgiveness to transform themselves and their organizations into forward-looking, agile learners and promote better results every day.

If you are still reading but still are having reservations, it is likely that you agree with my premise, but aren’t sure how to let go. Perhaps this quotation from the psychiatrist Thomas Szasz will help – “The stupid neither forgive nor forget; the naïve forgive and forget; the wise forgive but do not forget.”

The point is instructive. Events, mistakes and mishaps in the past can be learned from, but only if we can let them go through forgiveness. This does not mean we should forget those events, but rather put them in the proper perspective. They are events in the past that we can’t change now, but we can learn from.

A Final Note: If you would like a tool for introspection on your willingness and ability to forgive in the three ways described above, I recommend the free Heartland Forgiveness Scale.

I decided to do something today that seems fun – at least to me. I’m going to share four books...