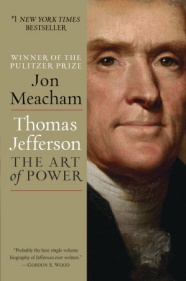 I’m a big fan of reading biographies of successful people because success leaves clues (I’ve explained this reasoning more completely here). This book is about a very successful man – one so multifaceted and talented that at a 1962 gathering in honor of all living Nobel Prize winners, President John Kennedy said, “I think this is the most extraordinary collection of talent, of human knowledge, that has ever been gathered together at the White House, with the possible exception of when Thomas Jefferson dined alone.”

Couple a biography with that of a leader in every sense of the word and a book written about that person from a perspective of leadership, and you get a book like this. Need more reasons? The author is a Pulitzer Prize winner.

This book looks at the long life of Thomas Jefferson, and focuses on his roles in politics and the ways he influenced others and the formation of a country. For those reasons the book is valuable. Even though the time in which he lived was different, and he became who he became because of the time in history, there are many lessons to be learned here.

Take this portion for the Prologue and you will see the focus of the book, and the value in reading it for yourself.

More than any of the other early presidents – more than Washington, more than Adams – Jefferson believed in the possibilities of humanity. He dreamed big but understood that dreams become reality only when their champions are strong enough and wily enough to bend history to their purposes. Broadly put, philosophers think; politicians maneuver. Jefferson’s genius was that he was both and could do both, often simultaneously. Such is the art of power.

This book is a biography and a history book – it weighs in at 800 pages – and while about a third of that is notes and other materials you won’t read, it is still 500+ pages of insight into a singular life and his impact on the world around him. In part because of the heft (I bought paper not digital) and in part because of the depth, I haven’t yet finished the book. Yet, I can still recommend it if you are interested in history and leadership, because in Jefferson we have a very valuable role model and in the author Meacham, we have a very able storyteller.

The Source of Your Fatigue

Seldom does a day pass without someone telling me they are tired, exhausted, or feel like they need a vacation....