On May 6, 1954 Roger Bannister set a new world record, as the first to break  the four minute barrier for one mile – running it in 3:59.4 (the current record is 3:43.13).  While the common myth says that people didn’t think the 4 minute barrier was physically possible, the reality is it was a barrier that stood for a long time – and was a big deal when it was broken. 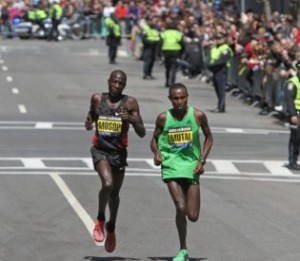 picture from Jeff Wilcox and the Boston Herald

On April 18, 2011, Geoffrey Mutai broke the Marathon record in Boston (though it doesn’t officially stand yet as the World record, a detail not important of this post – this isn’t a sports blog after all!), running the 26.2 miles in 2:03:02.  This record time equates to about 4:43 for every mile for over 26 miles!

Let’s put Mr. Mutai’s time in perspective.   According the the progression of world record mile times, his one mile average, would have been the world record time for amateurs until 1861 – 150 years ago.  If the rough progression of marathon improvement continues, someone will run a marathon in under 2 hours sometime in the next decade – a barrier as seemingly unbelievable just a few years ago as the 4 minute mile was for so long.

Looking at the results from this week’s Boston Marathon showed me something even more interesting than the incredible speed of the world class runners.  Here it is:

23.41% of those who started the race were over 50 years old (and their % of finishers roughly matches the overall % of the field).

You have to run a qualifying time to even compete in the Boston Marathon, and over 23% of those people were over fifty years old.

Even as a non-runner these times are amazing to me.

Geoffrey Mutai said after winning the race, “When you trust yourself you can make it.”

“When you trust yourself you can make it.”

If you don’t get it yet, this post isn’t about running.

I wrote it to remind you of the truth about your potential.

It is greater than you think – and your trust in yourself plays a big part in you tapping into, finding and unleashing that potential.

Do you trust yourself?

Most of you reading these words are leaders, which means there is a bigger message here (as if thinking about your own potential isn’t important enough).

As a leader, do you see, trust and believe in the potential of those around you?

Do you trust them?

If you want to reach towards your potential and if you want help others move towards theirs – whether as runners, readers or real estate agents – you must trust them and influence them to trust themselves.

The truth about potential is that it is there – but to unleash it and manifest it for greater use in the world we must see it, believe it, and trust in it.

Last week Becky Robinson, my crack Social Marketing Director alerted me that I was about to write my 500th blog post on this...