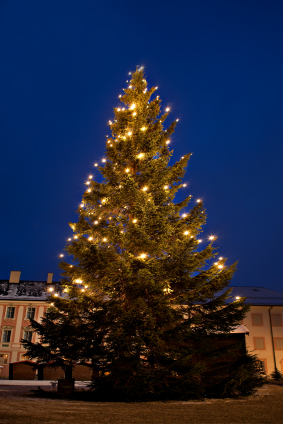 Eight year old Sam Baker was wondering about something, so he asked his parents, “How come our town doesn’t have a Christmas tree lit up for everyone in town to enjoy?” He reasoned that other nearby towns had trees, that they had a tree at the White House, and that he saw them light a tree at Rockefeller Plaza in New York City.

He thought those Christmas tree lighting ceremonies were pretty cool and he didn’t see why they couldn’t have one right there in Ellettsville, Indiana . . .

Mom and Dad didn’t know the answer, and told Sam just that. And much like you would probably have done, they didn’t think too much more about it.

Charles Baker said when he kept asking about it, he realized Sam was serious. “For whatever reason, Sam thought having a tree for everyone in town to enjoy was important. When we realized he wouldn’t let it go, we decided we needed to help him get an answer to his question.”

So Charles and Melissa Baker took Sam to see the mayor, who told them he couldn’t solve the tree question, it would be a question for the City Council.

So Mom, Dad and Sam went to a city council meeting, where during the open forum of the meeting, Sam asked his question and pled his case.

“Why don’t we have a Christmas tree and a lighting ceremony right here in Ellettsville? Think about what it would do for people’s Christmas spirit. Why can’t we have a tree?”

The city council was moved by Sam’s question and began to think about his idea. Soon the obstacles were being addressed. In the ensuing months . . .

Someone donated the tree.

The city agreed to have city workers set up the tree.

Local electricians donated the lights and the time to light them.

The high school band agreed to play at the lighting ceremony.

And the next year, in early December, the first annual Christmas tree lighting ceremony took place in Ellettsville. Many people from town were there. The band played. Santa even showed up.

And Sam Baker, age nine, flipped the switch to light the tree.

Did Sam Baker have control over whether there would be a Christmas tree lighting ceremony in his hometown?

Did Sam have influence over that outcome?

Influence isn’t about us, and, at the same time, it is all about us.

Like Sam, you have the ability to have influence on a great number of things and people around you. While you don’t have any guarantees that something you do or say will lead to others making different choices or taking different actions, you might be able to. You can’t control others, but you can influence them. And if you want to have the most possible influence, you must realize that it isn’t about you but about helping others choose something new or different.

In this way, influence isn’t about you at all. The most influential people put their focus on others – their needs, their desires and their perspectives in order to help them make new decisions.

And yet if Sam hadn’t asked the question about the tree, and hadn’t been persistent about asking his parents about it again, and if he hadn’t gone to the city council meeting, and shared his vision and idea again, there would have been no tree lighting.

No action by Sam, no tree lighting. In this way, influence is all about us.

You can’t control others, but you can influence them. And in order to influence others you must take action. By rightly seeing that your actions and choices are in your control, you can then choose new actions that might influence situations over which you have no control.

Over the past few weeks, I have read Habit: The 95% of Behavior Marketers Ignore by Neale Martin. As a...