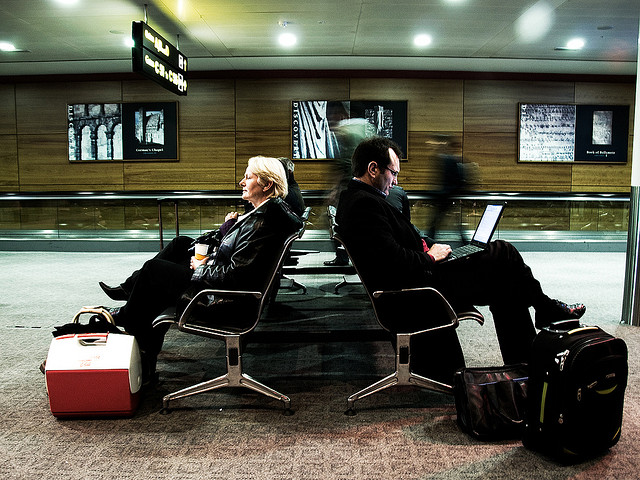 I travel enough to have lots of travel and airline stories. Overall, I have as many positive ones as negative ones. In fact, I am typically very productive on airplanes, even when the seating space is tight. Today, however, I want to talk about one of “those” travel days.

This particularly interesting travel happened about a year ago, but I was reminded of it recently. My day was supposed to be relatively straightforward – fly from White Plains, NY through Chicago to Phoenix, arriving there about 12:30 local time. But that isn’t how it went.

I arrived at the airport about 5:45, and by the time we went to the plane (in the rain), it was 6:50. We left, about on time, and once in the air there seemed to be a strange vibration under my seat. I quickly found out why – the pilot told us he couldn’t get the landing gear up. He said we would be able to land (thankfully), but couldn’t fly that way all the way to Chicago, so we would land in LaGuardia and they would rebook us all. This seemed fine at first, until they said we would have to fly for awhile to burn enough fuel to land. By my calculation, we flew around within 20 minutes of the time it would have taken to actually fly to Chicago.

I was trying to be positive and proactive, so I called the airline to get rebooked while we waited (and waited and waited) on the tarmac, until they found a place to put the plane. It was raining and we had to get on a shuttle bus to take us to the terminal. Wet again, I went to an agent to get the boarding pass for the flight I had just arranged for on the phone. But for whatever reason, it took 45 minutes to get that important piece of paper – which almost made me miss my new flight (which I could only get to by going through security again).

By this point, I wasn’t nearly as positive or upbeat as I had been while still on the plane. I had made the critical mistake of choosing anger. I was angry at the guy trying to get the ticket changed (though I was cordial). I was upset I would have to go through security again. I was having a pretty good pity party for myself as I walked toward my new gate, then I found out that flight would be late.

I got on the plane and took a look at my choices. I wasn’t happy with them. I had gotten angry in part because of how I choose to label my day – when I labeled it as “bad” I stopped looking for anything else. When I gave myself an attitude adjustment, I stopped labeling my day’s events negatively, and looked for ways to make the rest of my day (as unplanned as it was) better.

Even though there were as many snafus after that as there had been before (I arrived in Phoenix about 8:00 local time – over 17 hours after I left the hotel in White Plains), my new choice and my new labeling for my day made all the difference.

As a leader, you must take the higher road. Always remember that your attitude is your choice. While you may get angry or upset, you must move past it as quickly as you can. Your team and organization deserve you at your best – choose to be there.

It happens at this time of the year, every year.  As the New Year arrives, people talk about making resolutions. ...