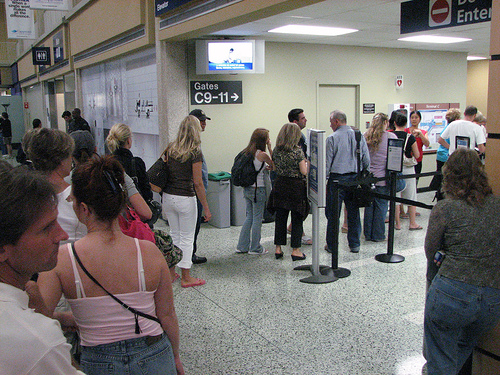 It had been a long day of work and travel, and it was going to get longer.

Due to weather issues around the country, flights across the eastern half of the U.S. were delayed and canceled. It was snowing heavily in Denver, where I had just landed to find my connecting flight canceled. I quickly found my way to the end of the long line of other harried travelers who were trying to figure out how to get to their destinations.

It wasn’t a picture of serenity.

As I got closer to the front of the line, I watched the ticket agents behind the desk take one complaint after another. I noticed how normally sane travelers were angry, screaming, and generally blaming these ticket agents for their issues as if those agents could change the weather or magically make a plane appear.

I decided I would take a different approach. Yes, I was tired and I was frustrated, yet screaming didn’t seem like a kind —or particularly effective —approach to the situation.  As I thought about what my approach would be, I overheard the person directly in front of me. It would be hard not to, because he was outlining everything that this airline had done wrong and why he would never fly this airline again, and apparently it was all the fault of this agent. He was headed to the same place I was.

Nancy, the ticket agent, was pleasant and remained calm in the face of the unrelenting grief the passenger was sending her way. And then I heard her response: “I’m sorry, sir, but the next seat I have is on the flight first thing tomorrow morning. I truly apologize.”

His response was less than pleasant as she gave him the news and his new ticket (along with some travel vouchers).

“Hi Nancy,” I said, smiling. “I’ll tell you that I don’t envy you on a day like today.  You should be paid double for the extra effort and having to put up with angry and frustrated people.”

She smiled as I continued.

“I’m going to make this easy. I’m not going to hold you accountable for the weather, OK?  Plus, I’m going where that last guy is going, so you won’t have to do too much, assuming there is another seat on that morning flight.”

Smiling back at me, she asked, “Indianapolis, right?”

“Just a second,” she said as she focused on her monitor, fingers flying.  She kept typing and looking, and looking again.  After a couple of minutes, she looked up at me and smiled as she handed me a ticket.

“Here you go, Mr. Eikenberry, it’s not for tomorrow. The flight leaves in 45 minutes.  I have a first class seat for you.”

I took the ticket, and shook her hand, looking her in the eye.  “Thanks, Nancy,” I said, “I really appreciate it —and so does my family.”

We had to sit on the runway for a couple of hours before we could take off, so I didn’t get home until the wee hours of the morning. As we were preparing to leave, the pilot said that we were the last plane leaving Denver that night. The snow was closing the airport and the other planes in line were going back to the terminal.

I have no idea whether that first class seat was available when Nancy was talking to the man in front of me; the seat could have just opened up. All I know is that Nancy, while she couldn’t control the snow, could control who got seats.

This simple story highlights seven stunningly simple things you can do to have greater influence and impact every day. Let me share them with you now.

Use a person’s name. Anytime you have a chance to use someone’s name, do it.  Someone’s name is sweetest sound in the world to them. Learn names, remember names, and use them.

Acknowledge people. Let people know that you notice what they are doing.  Simple acknowledgment is sometimes more valuable even than agreement.  In many situations, you may not agree with someone, but you can always acknowledge them and their opinion.

Be interested in them. Most passengers, when they got to the front of the line, began venting about their needs. I had those same needs and concerns, and yet I focused on Nancy. Be interested in other people and they will, in return, become more interested in you and your needs.

Say please and thank you. These are some of the first words our parents try to teach us to use. You know why? Because they are important —and they work.

Be kind. This is another lesson you learned at a young age. Sometimes it is hard to be kind, especially if you are angry or frustrated. It is even more important when it is more of a challenge.

Assume the best. I believed Nancy was doing the best she could. I had been watching her for several minutes and she was efficient and pleasant even in the face of the verbal onslaught she was receiving. When you assume the best in others, you give them a valuable gift.

Zig Ziglar’s most famous quotation seems like an appropriate way to close this piece.  He wrote, “You can get everything in life that you want, if you will help enough other people get what they want.”