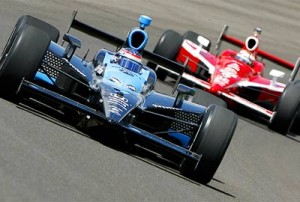 In central Indiana, the last weekend in May isn’t just Memorial Day Weekend – it is Race Weekend. It’s the most famous auto race held at the most famous race track in the world. In over 100 years of racing, there have been many leaders and visionaries involved at the track and with the race – titans of industry, engineers who pioneered new things (as just one example, the first rear-view mirrors were used at the Indy 500) and much more.

While you could say the race is about many things, in the end, most of all, it is about speed. And as leaders we must think about, understand and use speed intelligently as we move ourselves and our organizations towards our goals and visions.

So, in honor of “the Greatest Spectacle in Racing”, here are seven lessons we can learn about speed, as seen through the eyes of the Indy 500.

Remember perspective.   Try driving 50 miles per hour on a crowded city street and it feels very fast. Drive 50 on an empty Interstate highway (or a race track), and it seems quite slow. Your speed of motion must always be put in perspective and when you create the right environment around you greater speed can become more comfortable.

Create a sense of urgency. Race teams have a tremendous sense of urgency – they have a race to win! You are in a race, too – towards your organizational finish line. Most everything in life works to slow us down, unless we are consciously doing things to speed us back up. As a leader you must create the sense of urgency to keep things moving forward.

Build a new normal. For many years people found time trials at Indianapolis almost as exciting as Race day. Why?  Because nearly every year a new track record for speed would be reached. The competition to win drove (literally) teams to find more and more speed. Barriers such as 150, 200, 225 miles per hour all fell – and the current record is nearly 237 mph over a ten mile qualification run. As you build a sense of urgency, you must also create a new normal. Help people see that “this is how we do things around here.”

Remove distractions. Drivers have in the car only what is really needed to reach their goal. Distractions get in the way of speed! What are the distractions in your working life? What distracts your team from moving forward faster?  Identify your distractions and ruthlessly remove them, or relegate them to a specific time and place. If you need a simple example, think about how much your many electronics distract (as well as support) your speed.

Install planning time. Race teams don’t unload their cars from the truck and go to the track; they prepare and plan.   Too often we forget this lesson. We are in such a hurry to get done that we dive in without enough (or any) planning.  As a leader you must resist this urge and build in time for planning. When you don’t have enough time to plan, you often end up with rework and other challenges. Installing planning time, as paradoxical as it seems in the moment, nearly always improves overall speed, which leads us to the next point.

It is the average that matters. They call it the Indy 500 because it is 500 miles. The car that goes fastest in qualification and takes the pole does so based on a four lap (10 mile) average. The race isn’t always won by the fastest car, with the most top end speed, but with the best average over 500 miles. As the leader, take the long term view on speed. Enable your team to greater speed over time, not just in a sprint. Your job is to increase the average. Bursts might be helpful, and occasionally necessary, but it is endurance, dedication and a sense of urgency combined that will take your race.

Sometimes speed must be regulated. There aren’t new track records set in May anymore. The track record is 236.986 mph (Arie Luyendyk in 1996), but this year’s pole winning speed was “only” (remember speed is relative) 231.685 mph by Scott Dixon. Why so much slower? Because several years ago, the track determined that the speeds were too fast from a safety standpoint. You see, even an organization and culture built completely on speed, finds limits and regulates speed. As a leader you must do this too. Make sure the speed of your organization is healthy; make sure that you aren’t unduly sacrificing quality for speed. While I urge you to create more speed in your culture, you must also be ready to regulate it.

Think about your personal, team and organizational goals. Would you rather have them sooner than later? If so, realize that you are in charge of organizational speed.