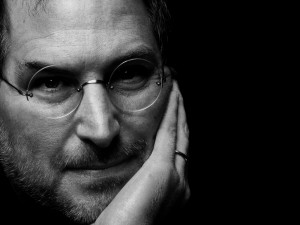 I grew up on a farm — an environment where mechanical equipment abounds and things break (often at inopportune times). Given that, having great mechanical skills and aptitudes are a great benefit to a farmer. Thankfully, my father had those skills. He was so good at the variety of skills required that I grew up feeling woefully inadequate – believing I had no capacity to be effective in tearing apart, fixing, or even diagnosing mechanical problems.

I carried that belief with me until I was out of college and was a first time homeowner. Thousands of miles from Dad I learned that two important lessons:

Recently, Apple co-founder Steve Jobs died. In the hours and days since his death his comments and quotations have been printed and repeated often. His famous Stanford Commencement Address has been mentioned, excerpted and replayed on YouTube. Many who knew him, and many who didn’t, have talked in nearly reverential tones about how wonderful a communicator, creative visionary, and leader he was.

Many who are writing, saying and thinking these things are feeling about themselves in comparison to Jobs, like I felt in comparison to my father. Barely veiled under comments about his skills are the feelings, “I could never pitch a new product like Steve,” or “Steve was so great at that.”

People are falling into the trap I fell into in relationship to my Dad — the very dangerous Comparison Trap. The Comparison Trap starts, perhaps with a healthy admiration, but quickly becomes a losing proposition because:

Does that mean we shouldn’t admire or look up to the skills of others?

It simply means to avoid comparisons and focus on a learning opportunity.

When we translate the comparisons and attendant feelings of futility and victimhood into actions (Ok, so now what should I do?) we are grabbing the Learning Opportunity. Here’s how you make that translation.

Remember that imitation may be the sincerest form a flattery, but it isn’t necessarily the way to get the best results.

I’ll never be as naturally gifted (or as skilled) as my Dad was with mechanical things, and I can continue to learn from his example.

You’ll likely not be the technical visionary that Steve Jobs was, and you can learn from him . . . as long as you take action . . . and avoid the Comparison Trap.

Best Practices Are Stupid – 40 Ways to Out-Innovate the Competition

This week's Resource Recommendation is Best Practices Are Stupid – 40 Ways to Out-Innovate the Competition by Stephen M. Shapiro....