By Rick Harrison and Tim Keown 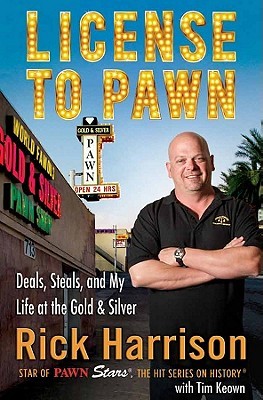 One of my guilty television pleasures is Pawn Stars on the History Channel. I first saw it in a hotel room late one night.  And I was hooked from the first show.  If you haven’t seen the show, it is, as described in this book, “like the Antique Roadshow with attitude.”  Set in a real pawn shop in Las Vegas, the show consists of people bringing in unusual, collectable (sometimes) and historical items to sell. During the show, Rick Harrison, owner of the shop and author of this book, along with his father, son and one other employee, work with the customers, sometimes buy the items and help viewers learn more about history in the process.

I like the show, and apparently others do too as it is now one of the most highly watched shows on cable television and is syndicated around the world.

When I heard that Rick had written a book, I decided I had to have it – so to my Kindle it landed and I read it within 24 hours.  The speed of the read says something about my interest, the breezy, easy writing style and the fact that the book isn’t as long as War and Peace.

The book is open – about the backgrounds of the characters, the workings of a pawn shop (and the industry), and about the show.  It is also sometimes crude from a language perspective.

Why am I recommending a book about pawn shops and a television show on this blog?

1.    It is entertaining. This is especially true if you watch the show.  If as a result of this post you decide to read the book, watch an episode of the show first – it will be a more interesting and meaningful read.
2.    It is educational.  If you are curious about new industries, settings and television production, this book will be fascinating on all fronts.
3.    It is inspirational.   This is the biggest reason I recommend this book.  If you read this blog, you are interested in developing your skills and becoming more successful.  You are, most likely an achiever.

And achievers can learn from this book.  While you might be tempted to pass the early chapters about Rick’s life to get to the stuff about the store and the show, don’t, because it is the most important part of the book.  If you think you have reasons or excuses for not achieving your goals, read about Rick’s life and your excuses will melt away. (And there are chapters by each of the other “stars” of the show sprinkled in, and the same is true for their stories too).

The story of how they actually get a pawn license in Las Vegas is worth the book in itself.

This book tells the story of the American dream – successful business, restored and happy family and even media attention – starting with and expanding on the gory, long before the glory.

If that is attractive to you, buy this book; you’ll be glad you did.

Are You a Courageous Leader?

Courage is an attribute usually attributed to very ill people and people in extreme danger. I mean, we need courage...