Unless you live under a rock, or are truly adverse to the media or professional sports in the United States, you likely know that the NFL has operated the first three weeks of their season with replacement officials. The back story is that the League locked out the regular officials as a part of the negotiations for a new union contract. 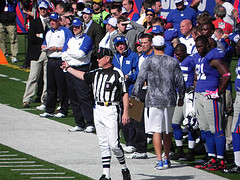 As the weeks have gone on, errors and errors in judgment of the officials has become the number one topic of conversation of fans – the penalty calls – not the play calls have taken center stage.  Monday, the biggest mistake was made – an apparent-to-most-of-the-world mistake on the last play cost the Green Bay Packers a game (most people in Seattle – the home of the winning team probably feel better about the call).

As I have been thinking about the situation, I’ve identified some leadership lessons worth our consideration.  Here are a few of them.

Employees aren’t commodities.  The replacement officials didn’t come off the street. They came from officiating football at the lower divisions of college ball, and, in some cases, other professional leagues.  These men (and women) know the roles of officiating and more than the basics. And yet, officiating with bigger, faster players and far more visibility of their work changes the role significantly. Without their basic experience, they couldn’t succeed at all, yet the experience of doing the exact job required matters, too.  To expect new employees to perform at the levels of your experienced people, with no drop in performance, is folly.

Work is complex.  Your work (or the work of your people) is likely quite different than these replacement officials, and there are more similarities than you might first imagine. There is the need for judgement, wisdom, and an even temper.  There is a need to understand the policies and procedures to a significant level of detail. And to succeed requires more than general knowledge. The replacement officials know more about football and the general rules of the game than do any of us reading these words, yet the specific differences between the rules at NFL level and the leagues in which they have previously worked is significant.  To expect people to succeed without adequate training, background, and experience – in other words, without recognizing and overcoming the complexity of the work – is a mistake.

[A side note – these first two items are similar, and, it is important to note, they aren’t about the people at all – they are about the processes of selecting and preparing people to succeed.  There is little doubt, even from the biggest critics of the current NFL situation, that the officials are working hard and interested in doing a good job.  They are just not equipped to succeed.  Let me repeat to all of us as managers and leaders – this isn’t a people issue, it is a process issue.]

There’s more to the work than the work itself.  The complexity of work is about more than the procedures and rules. These officials are trying to do their work as a part of a team. One of the factors of performance not being discussed by fans and pundits is that these officials are trying to operate as a team. The permanent officials work as a part of a crew or team for most all of the season – they learn to work together, have trust in each other, and learn to rely on each other in a multitude of ways. The current situation has employees trying to do really hard work, and trying to build a team at the same time.  There is no doubt that there is more to the work than the work itself, and, as a leader, we must help people overcome it.

Beware the changing world.  Lastly, a lesson more about the boardroom than the playing field. The stated goals of the team owners is that they want better quality officiating in the future. The measures they want in a new contract include more accountability for officials’ performance, a training process, a succession plan for new officials, and more. All would agree that the goals are worthy ones. And now, in the midst of growing furor over the replacements, it is important that the owners recognize their ultimate goals. The world looks different now to the fans/Customers of the owners than it did a few weeks ago.  Holding onto goals is important, and as the world changes, our goals, strategies, and objectives might need to flex, too. The best leaders are observant of the world around them and ready to make adjustments as needed.

The context of this article as been football, but the lessons apply to all of us as leaders. Put them in action, and you will be a more effective leader.

Sharing Responsibility – Why We Don’t Want To, and How to Do it Anyway

As a child one of the first things we are taught to do is to share.  We don’t do it...