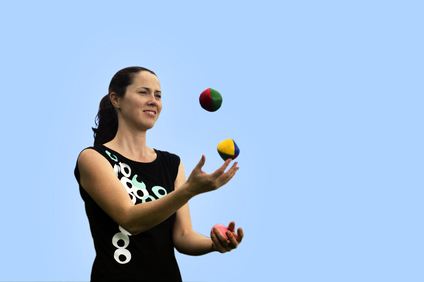 I taught myself how to juggle when I was in college. I don’t remember why I did, but I am glad I did. I can juggle different types of balls, cups, small boxes, eggs and combinations of those. And no, I haven’t juggled fire sticks or chainsaws (which people always seem to ask. What do they think I am, crazy?).

I have used juggling as a way to relax, to start conversations, I’ve used it as a metaphor to teach lessons in training, and as a result have taught hundreds of people how to juggle as well.

Since I learned that Saturday was World Juggling Day, I decided to share some connections and ideas between juggling and leadership. I think you will find them interesting and perhaps even surprising.

First there are some big connections between the process of learning both of these skills. If you want to learn how to juggle, the following things are true. . . .

You learn one step at a time. The way to learn how to juggle is not by picking up three balls, but learning, practicing and perfecting the flight of one ball. Know where and how to throw one, and get that into muscle memory. As a leader we can’t learn all of the skills at one time – to learn them effectively is to practice one new skill at a time, building confidence and competence in it, before focusing on the next skill. (This is the approach we take in our Remarkable Leadership Learning System.)

Until you learn, it seems overwhelming. When you look at a juggler, you marvel. It seems complex and amazing. (While I don’t feel that way about someone juggling 3 objects, I still feel that way about people juggling 5 or more items!) Sometimes we look at leaders who seem to do things with so little effort and wonder how that can be. It happens, as it does with juggling – with concentrated practice.

Adding a new ball changes everything. I’ve been able to juggle three items in two hands, or two items in one hand for 30 years. I still don’t know how to add a ball. Admittedly, I haven’t focused on or gotten coaching on how to do it. I am confident I could if I sought out that coaching. And just like juggler Kevin, many leaders get stuck at one level of performance, and they don’t know how to move forward. The key to moving to the next level is with the perspective, wisdom and insight of a coach.

It can be learned. Did you notice what I wrote earlier? I’ve taught hundreds of people to juggle. I can say with complete confidence that if you can toss a ball from one hand to the other, you can learn how to juggle. I’ve seen it happen. Juggling can be learned. And so can leadership. Becoming a more effective leader is a set a skills, all of which can be learned.

And yet I know that you weren’t likely thinking about these kinds of things as you read the title of this post. You were probably thinking about the connection between being a leader and being busy – constantly juggling multiple projects and priorities. You probably thought I was going to talk about how as a leader we must be a juggler of all of these things to be most successful.

Yet I believe the juggling metaphor is the wrong metaphor.

While I can’t speak for professional jugglers, I know that when I am juggling, I am not focused on the individual objects I am juggling at all. If you watch a juggler you will notice them looking straight ahead, not watching the path or flight of the individual balls. The juggler is focused on keeping the balls in the air, not on the balls themselves.

And as leaders, far too often we are focused on keeping everything going, rather than on the individual items themselves.

The best leaders aren’t jugglers at all.

They aren’t trying to multi-task, scurrying and rushing around to keep all the projects in the air. They have all the balls on the table, in clear view and ready to focus on them, but they work on one thing at a time.

The best leaders keep the focus on the ball at hand, not the juggling act.

It is a matter of focus and it raises a great question – are you leading, or simply juggling?

While I am glad I can juggle, and love to do it, I have learned over time that juggling balls is fine, but juggling the various components and roles of my work as a leader is a bad plan.

One project at a time.

One person at a time.

One task at a time.

One team at a time.

One change at a time.

One conversation at a time.

One issue at a time.

One idea at a time.

We might work on several of those in a given day or week, but when we are on one, be on one.

That approach will get us farther, faster.