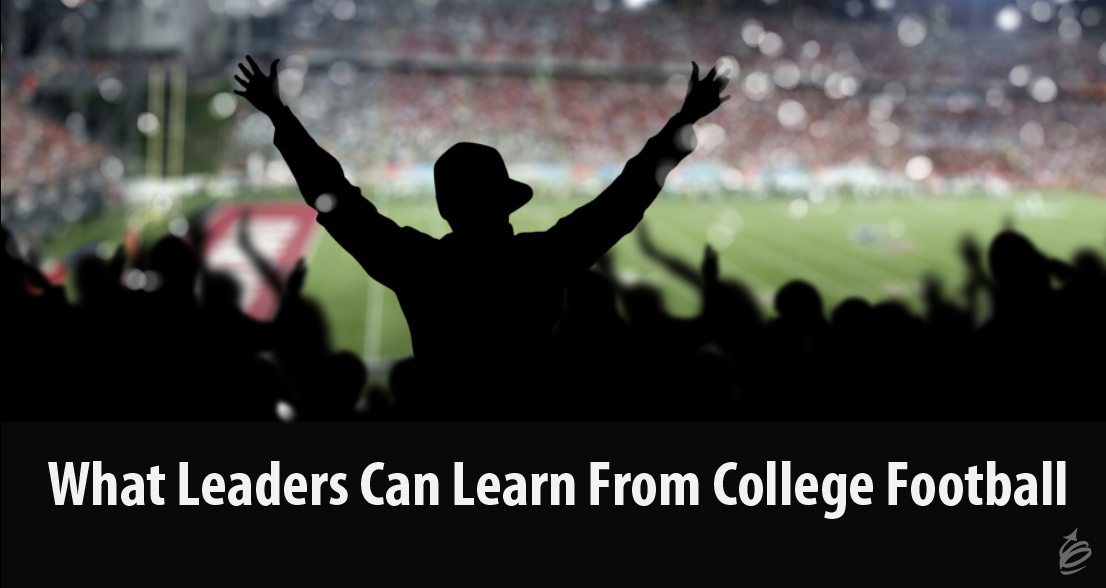 It’s that time of year… The sound of the bands. The roar of the crowds. The smells in the tailgate areas.

For some that means very little, but for many, it is a signals that all that is right with the world, as long as their team is winning.

Whether you are a hardcore fan, who still paints your face with school colors on game day and plans your fall schedule around when and where you team is playing; or you have never been to a game and could care less, there are lessons all leaders can take from college football, if you will take the time to look.

I’m giving you five lessons that all start with P (you know, like Pigskin?). Each of these things is pretty readily seen in any college football game, and each has direct implications for us as leaders. Let’s kick this thing off . . .

Pride is evident and abundant at a college football game. You can feel it on the campus and in the stadium and you can see it on the TV. The teams have pride in themselves and what they stand for. The spectators exhibit huge amounts of pride – whether they attended the school or not.

Pride is a powerful emotion – it can motivate and sustain effort. It helps people see a bigger purpose in their work. What are you doing as a leader to instill, grow and support pride in your team, in the work, in your Customers and more?

In large measure, the support shown by the fans for their team is positive! Yes, there is a point when on the losing end of a lopsided game where that might change, but generally speaking, the fans are cheering for and supporting the success of the team. And watch any game for just a few minutes and you will see encouragement and support between the team members (at the end of every play!) and with and from the coaches too.

Humans thrive with positive support and feedback – and far too few people receive enough of it in the workplace. As a leader, you can change that for those that you work with and around. How much positive support are you sharing? How could you share more (and do it more frequently)? When will you start?

This one may not be as obvious during a game, but the fact is teams practice all spring and for weeks in the fall, and then most every day of the weeks between games. If a coach declared his team didn’t need to practice, that “they were ready” without practice, they wouldn’t have their job for very long.

Practice, when done well, builds skills and confidence. Whether practicing a pass play, a presentation or how to execute a technique on a job, practice matters. Are you expecting people to practice? Are you providing them chances to build skills and confidence when everything isn’t on the line so they will perform better when it is?

The week of a game there is more than physical practice; there is also preparation. Coaches create a game plan, based on the tendencies, and the strengths and weaknesses of both teams; there is film study; and immediately before the game there are routines, exercise and more to prepare the team for success.

If practice creates physical readiness, preparation prepares the mind. How are you helping your team members prepare for new projects? What routines do you suggest or put in place to help you and your team perform at your best?

It is called a football game because for all of the work, effort and preparation, it is still a game that people play. The best teams and best players have fun while doing the hard work that is football.

While perhaps not as physically difficult as football, the work you and your team does is hard too. Is your team having any fun or gaining any enjoyment from the work and the results? If not, what can you do to change that?

There are other lessons that I see, and others you will see too – if you watch a game. Take the time to watch, even if you don’t care who wins; because there are leadership lessons waiting for you.

The ball is kicked, the crowd is roaring, and now you can settle in for a leadership workshop while you watch the game.