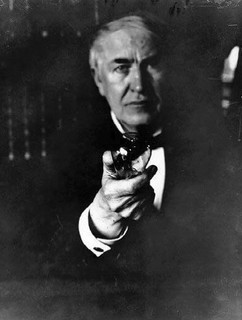 Thomas Edison was a great inventor.  But Thomas Edison was a greater salesperson.  He and his team may have invented the electric light bulb, but without the support and resources (read investment) of others, that idea wouldn’t have moved forward from his team.  The idea looks obvious now, but all successful new ideas look good with the 20/20 perspective of looking backwards.

Much of the writing and thinking about creativity is about getting the idea.  While getting the idea is a necessary seed for the process, in the end you must be successful in convincing, persuading and yes, selling your creative ideas if you want them to be used and applied.

The time will come, sooner or later, when you have a great, new idea that you want to persuade others to support, provide resources for or buy. If you don’t sell it, it is almost like you never had the idea in the first place.

Here are some suggestions on how to help others see what you already see – and sell them on your creative idea.