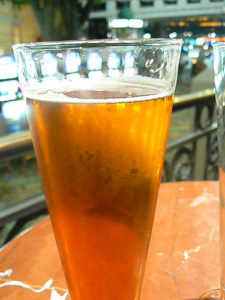 I caught myself humming a tune from my past the other day.   It’s an old Tom T. Hall song titled “I Like Beer.”

Just to give you a flavor, here is the second half of the chorus . . .

“Whiskey’s too rough, champagne costs too much, and vodka put my mouth in gear.  This little refrain, should help me explain, as a matter of fact, I like beer.”

I learned the song long before I ever drank a beer, but now, 35+ years later, I certainly can identify with it. Humming the song makes me a bit thirsty, but also gets me thinking and making connections.

Here are my thoughts, as recorded (first) in my journal.

Beer is typically an acquired taste. I don’t know anyone who really had leadership figured out the first time they were in the position to lead. The complexity and challenges can be daunting. Yet while some people may say in that moment, “leadership isn’t for me,” those who persevere and keep trying will begin to find an initial comfort, and a desire to learn more and lead more.

Different traditions and environments make beers different. Belgian beers are different from the beer brewed in Mexico or Japan. There are differences in process, and in the water. In the same way, your background, experiences, character and values make you a different leader from me. And just like Corona (from Mexico) and a Sapporo (from Japan) are both beers, we can both lead successfully even if we have different backgrounds and initial inputs.

Different ingredients make beers different. Ingredients make all the difference in beer – and not just the water. So it is with us as leaders. What inputs you use – the books you read, the seminars you attend, the mentors and coaches you learn from, all make you different as a leader. If the brewer wants a different flavor or character in the beer, they change the inputs. And if you want to alter your leadership style or skills, you add different inputs too.

People often move from simpler beers to more complex ones over time. These different ingredients can make beers more complex in flavor. And generally (though not always) the longer you drink beer, the more likely you are to like or appreciate something more than a basic lager. Leaders who are interested in the craft of leading typically graduate to more advanced techniques and subtle differences in approach as they mature in their roles.

After I had finished writing these ideas, I put my pen down. But before I closed my journal, I picked up the pen and added one more.

Beer is best in moderation. This goes without saying, I suppose. But in the case of leaders, we must know when to stop leading and let others go. We must engage people, grow them and when the time is right, let them go. Similarly, there is a time to put down the beer. Too much of a good thing, is well, too much.

I love a good analogy, especially when I can tie two things I really appreciate together. If you drink beer, the next time you take a sip, think about leadership, and drink a toast to yourself.