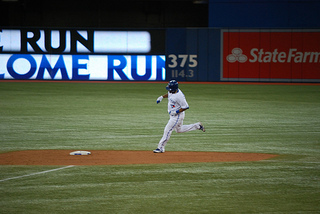 Today in 1961, Roger Maris broke the single season home run record of the legendary Babe Ruth when he hit his 61st of the season.  Babe’s former record had stood since 1927, and had been seen by many as untouchable (Maris’ record was topped 37 years later and has since been eclipsed again).

Because of the popularity of baseball and the lore of the act, the phrase “home run” has expanded beyond baseball usage to imply a great and fast success.

In baseball, there are two basic offensive strategies. One is building a team of power hitters and playing for the home run or fast win, and the other, what is sometimes called “small ball” or planning to get lots of singles, and through the collective effort, scoring more runs (and worrying less about the big single swing).

Those two strategies can, and have been, translated to business as well. And as a leader, we have a responsibility to realize which strategy we are employing and make sure we build our team, and set expectations accordingly.

So enough with the baseball talk, let’s turn the metaphor into a meaty discussion for all of us as leaders.

It only takes one.  One swing and one play can make a big difference.  Make the right decision or implement the right ideas and you might change your organization’s destiny very quickly.

Each one makes a big impact. One home run idea could change everything, and if you have two – well the sky may be the limit.

Beware the glamor.  Home run hitters think they can hit one every time they come to the plate.  Once you or your team have hit one, you may start to think that every idea is a home run, and move forward too quickly. Remember the ball that doesn’t quite clear the fence is usually a long out.

Four Implications of the Singles Strategy

It takes a team.  One person and one idea don’t change the world, which means a team is needed, and every member of the team is critical to success.  This requires building a complete team, but also engages those on the team because they know their contribution can make a difference.

One may not be enough. Since we aren’t swinging for the BIG idea, we’ll need lots of ideas, each building on the other, to help us reach our goals. However, even when you are playing for singles, sometimes you get one out of the park.

Discipline is needed. The singles strategy is about quantity, so more ideas will be implemented, more ideas considered, more processes put in place.  This strategy won’t win immediately, but may, if implemented with discipline and focus allow for victories to come over and over in the future.

I’ve opened up the conversation about how you want to view, support and expect people to make decisions, solve problems and innovate. From this starting conversation, it is up to you to look at your team, your culture and your expectations (as well as your personal preferences and personality) and decide which strategy suits you, your organization and your environment most effectively.

Has it Really Been 19 Years?

1993 was 19 years ago. Like any year there were many events that are memorable.  Some even changed the course...