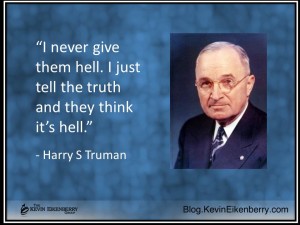 Today’s quotation comes from a man who became President first by not being elected (when Franklin Roosevelt died) and remained after most thought he wouldn’t win re-election.  In this quotation he talks about how he feels his behavior was mis-perceived.

I think it has application for us, which is why I share it with you today.

– How willing am I to tell people what the truth really is?

– When/if I don’t tell the whole truth, is it serving me and the others in the situation to do so?

1.  Today, when you are tempted to understate or shade the truth, check your intention.  Ask yourself why you aren’t planning to tell the whole truth.

2. Then, resolve to be more truthful and forthright.

3.  Share the information completely, but with care and tact.

Most everyone says they value honesty and want others to be honest with them.  Most people say they are honest, yet I believe we often fall short of the full truth, and I think today’s quotation is one of the big reasons why.

We want to be liked.

We don’t want to be seen as rude.

We don’t want to make a big deal.

So we sugar coat, understate or hedge.

It isn’t really lying is it?

I’ll leave you to decide that; I’d rather we focus on our intention.  People want the truth in most cases, and sometimes when we give them less than the truth it doesn’t serve them or us.

Here are two facts about the author of today’s quotation. Harry Truman is seen by historians as one of our finest Presidents – he led the United States through many challenges, including ending World War II.  He was also known as “Give ‘m Hell Harry” – for his upfront and honest approach.  Perhaps there is a connection between those two facts.

Previously I've written about your role in the overall attitude of your organization; next month we are holding a teleseminar...