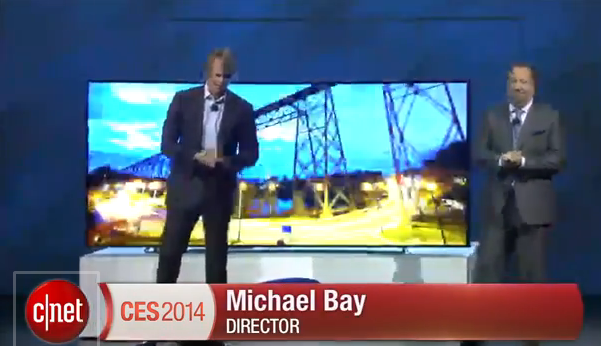 Lots of people have visions of crashing and burning when giving a speech. The nightmares seem real, and yet while you may not like presenting and may have had some blunders, you’ve likely not had a presentation-nightmare-come-true like Michael Bay (Director of the Transformer movies, among many others) had in Las Vegas last week.

He was there to introduce a new curved TV from Samsung along with a Samsung Executive. If you didn’t see what happened, watch this short (less the 80 seconds) video. For me it was painful to watch. (Adding to the nightmare, notice that once he started to stumble, how many phones and tablets started videoing him!) For Bay, an epic crash and burn. Here is his short blog post where he talks about/explains what happened.

Note – while the lessons that follow will make sense without watching the short video, they will be more powerful if you do. Take the 78 seconds, ok?

So, your nightmare came true, but someone else lived it. Now let’s talk about what you can do to make sure you don’t ever crash and burn like that. Consider the five points below to be both fire retardant clothing and a fire extinguisher.

Prepare, Prepare, Prepare. You have heard it before. It is the classic advice. There is a reason for that. It works. One of the best things you can do to avoid worst dream come true is to know your stuff. I’ve heard many people equate their preparation with the completion of their PowerPoint slides. Having slides isn’t preparation, just the cost of admission. Talk through, think through and rehearse your talk. This is the best presentation insurance on the planet. Click to tweet this.

Nail the Opening. The most important thing to prepare is your opening. This is true for several reasons, including:

Know Your Most Desired Response. Always know exactly what you want your audience to get from your presentation. When you remember that cold you can always just talk about it, even if all the rest of your plans go to Hades. Here is Bay’s planned speech. He might not commit the aspect ratios and geek stuff to memory, but his most desired response was to let people know that a cool, smart guy like him really loves the TV. If he would have remembered that, even when the flames were licking his rear end, he would have survived, and maybe even done better.

Technology-be-damned! By watching, and by Bay’s admission, the teleprompter messed him up. You may never use a prompter, but wait, you likely are using PowerPoint, which too many people use as their own personal teleprompter. Be ready and able to go if the technology fails you (and if you do the first three suggestions above, you will be well on your way), because one day, it will.

Prep in place. I could tell you many stories of professional speakers and performers who always want to practice in the actual spot where they will give the talk. At a minimum, you want to stand in the space and get the logistics down. Better, to actually do some of your preparation in the room, on the spot. If I were to wager, I’d bet Bay didn’t do that; but most of the best presenters would. You make your own call.

Do these five things and you might not stop the nightmares, but they will become less scary, because they won’t happen to you.

And one more lesson.

Mr. Bay, and presumably the product, will survive. And so will you. Even if you blunder a bit, or the presentation doesn’t go the way you planned, you will live. And it is how you walk through it and learn from it that will make all the difference in the world.