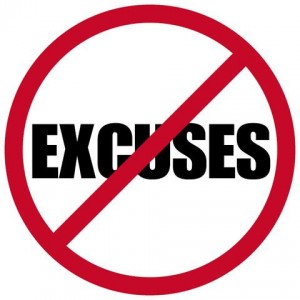 Here are some examples from the workplace (though I could easily give you a longer list outside of work too):

Excuses make me think about the old joke that if thieves would work as hard at anything else as they do planning their heists, they could be successful without stealing.

I believe that if people would spend as much time (half as much time would probably do it) thinking about how to overcome their excuse as stating it, they’d likely make progress (and prove the excuse wrong).

But it’s not just other people’s excuses that wear me out. . .  it is mine too.

My excuses make me static.  My excuses leave me on the sidelines.  My excuses sap my energy.  Even though I don’t like them and even though I am (usually) aware that I need to remove them – I don’t always succeed.

Excuses, though, are worse than just energy-sapping and productivity robbing.

Excuses are more pervasive than that – they become our beliefs, our habits, and our world view. And when they become that, we don’t see them as excuses anymore, we see them as facts.

Excuse = fact.  This is why they are worse than you think.

If you want to help others, as their coach, to make fewer excuses, you won’t succeed by simply calling it an excuse, because remember, in their mind it is fact. The way to help people past this perspective isn’t to give them new facts – it is to ask questions.  When you ask questions like:

What could you do?

All of these questions are examples of ways to help people get up off of their excuses (and couches) and try something.  Questions work because they allow people the space to think about their perspectives and consider alternatives.

You might have to ask multiple times in multiple ways.  And you may never move people – but rest assured, because excuses become beliefs, questions are your best shot and helping others move (and moving yourself too).

So… what is your excuse?

And what question will help you get moving?

Last Friday I posted a "Final Four" of learning quotations, and asked readers to vote on their favorite.   Last...