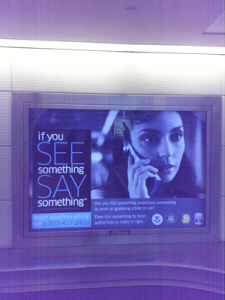 There is a phrase that TSA uses over the speakers at airports, in public service advertisements and on billboards like the one I recently saw (and took this picture of) in a baggage claim area.

If you see something, say something.

TSA is wisely using this catchy phrase for several reasons:

Let’s think about our role as a leader for a second. Don’t we want to:

If you see something, say something.

TSA knows that often in groups, no one will speak up – even if they see something wrong – because they figure someone else will do it.

Leaders know that people sometimes won’t speak up for a variety of reasons, including “it’s not my job.”

Hopefully you see some of the value in this catchy phrase and how it applies to us as leaders. Now let’s get less clever and more practical.

Culture is something that always exists (it is a fancy word to describe “the way things are done around here”) but it doesn’t have to be static. In other words, the way things have been done, don’t have to be the way they are done in the future. What is the culture that you want to have? How close is it to the one you have? If there is a small (or large) difference, what are you doing to explain and reinforce what you do want?

The fact is that if you don’t take action, you will getting more of the same – and the culture won’t change – or at least not in the direction you desire.

Once you have a picture of the culture you want, you have to make the expectations and description of it clear. “If you see something, say something” is a clear description of what the TSA wants in the airport culture. Once you know what you want, how can you communicate it clearly to others?

Once the expectations are clear, you must remind, reinforce, and hold people accountable for doing what the new culture demands. If we don’t do this, we won’t get people past their old habit patterns, and the new behaviors won’t have a chance to take root and solidify. Beyond that if we set expectations and don’t hold people accountable for them, the next time we want to change something, it will be even harder to do so!

You can’t change a culture alone – you must have help. It is everyone’s job to make these changes occur. As a leader, we must go first, but we must engender the help of others as well.

At this point I am sure you are nodding in agreement – I haven’t challenged anyone’s thinking too much . . . yet.

Culture development is everyone’s job – and contrary to what many leaders think, culture creation doesn’t have to start at the C-Suite. You can change the culture around you. Nurturing culture is your job as a leader – whether that is maintaining and nurturing something created by others, or creating a culture on your own team.

TSA is trying to continue to change air travel to make is safer. Who knew that their efforts provided such a powerful reminder to us as leaders?

A few weeks ago I recommended a movie not because I am a movie critic, but because it could be...