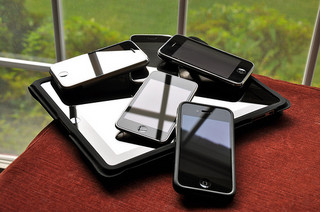 If you have flown anytime in the last several years you have heard some version of this announcement:

At this time, we request that all mobile phones, pagers, radios, and remote controlled toys be turned off for the full duration of the flight, as these items might interfere with the navigational and communication equipment on this aircraft. We request that all other electronic devices including laptops, Game boys, CD players, Mp3 players, tablets, e-readers be turned off until we fly above 10,000 feet. We will notify you when it is safe to use such devices.

The message is pretty clear – they don’t want us to have these items on, except above 10,000 feet.

A study released on 5/9/13 by Airline Passenger Experience Association (APEX) found that 99% of flyers carried at least one of these devices with them onboard. Further, and to the point of this post, the study found that,

We were told several times, yet nearly a third of us forgot, ignored it, or didn’t really hear it at all.

This is a big, obvious reminder that successful communication requires more than a good script and a clear message. Communication only really occurs when the message is received.

The Lessons for Us as Leaders and Communicators

There may be others, but here are some key reminders this example gave me.

Repetition alone isn’t enough. How many times have you said (out loud or to yourself) “How many times do I have to tell them?” Repetition does help make communication stick, but our experience (and this study) tells us that it isn’t enough. Remember that repetition of important ideas should always be in your communications repertoire – the goal is to give a consistent message without being repetitious.

Attention is hard to get. The next time you fly (or if you don’t fly much ask someone who does), notice how little attention is paid to the flight attendants during all of their announcements. When you see all of the conversations and multi-tasking that is happening as the make their announcements it isn’t hard to believe that 30% of people don’t follow the guidelines. What are you doing to earn the attention of those you are communicating with?

A well prepared message isn’t enough. The script is clear, the instructions are easy to follow. The script has been practiced, and the speaker is confident of the words, yet communication isn’t occurring. How much of that could be said about your last presentation? Prepare, but realize that in the end it is about the audience as much as the message itself.

Engagement is required. The flight attendants efforts are doomed because they haven’t really engaged most people. True communication can’t happen until there is engagement. If you have flown a lot you have perhaps encountered a flight attendant who does the announcements differently – they get the message through and create both attention and engagement with humor or in some other way. I have been on flights where passengers did stop reading to listen – and I’ve even heard chuckles and comments about the messages. While I can’t prove it, I’d bet more smartphones are turned off on those flights. What are you doing to truly engage your audiences, to captivate them and to make them a part of the communication and the message?

There are more lessons you can take from this study, but if you take at least one of these to heart and apply it in your communications, you will be more successful. Put up your tray table, stow your carry on, turn off your phone and think about how these lessons will help you become a better communicator.

The Effective Executive: The Defining Guide to Getting the Right Things Done

By Peter Drucker Here are two good clues that a book is worth reading. It has been copyrighted more than...