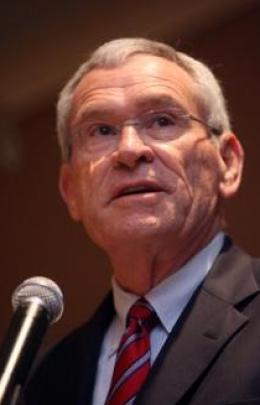 Last night I heard a report on NBC Nightly News, quoting the newly announced C.E.O. of GM (and former CEO of AT&T), Edward E Whitacre, Jr. as saying “‘I don’t know anything about cars.’ He went on to say, however, ‘A business is a business,’ in his view, and the principles, as he put it, are the same.”

I thought about this quotation last night, and tried to decide what I wanted to say about it in this blog post.  Before I decide to write, I searched to see if there was any more to the quotation.  As reported by Bloomberg in this article, the full quote,

“I don’t know anything about cars,” Whitacre, 67, said yesterday in an interview after his appointment. “A business is a business, and I think I can learn about cars. I’m not that old, and I think the business principles are the same.”

The words left out by NBC – and I think I can learn about cars. I’m not that old –  change the message from a leadership perspective significantly.

My reaction to the initial quote reported on TV was two fold:

1.  There is truth to the fact that “business is business” and a leader with his experience will bring significant value, whether he’s worked in the auto industry or not.  (in fact, his outsider perspective can be a significant benefit in and of itself).
2.  Saying that he knows nothing about the car industry and that it won’t matter sends a very interesting message to all of the employees he will be leading.   Think about it this way – how would you feel as a 5,10 or 20 year industry veteran if you heard your new leader disregarding industry knowledge?

My reaction to the full quote changes my thoughts about Mr. Whitacre’s tact, insight, mindset and leadership style significantly.  The line, “and I think I can learn about cars. I’m not that old“.

Regardless of which version of the quotation you read, it raises the important question I ask in the title of this post.   Must leaders know the business, or just know business?

My firm belief that there is far more things the same from business to business and industry to industry than there is differences.  If you agree, you will recognize that significant experience in one industry will mostly transfer to another.   However, while businesses are mostly the same, they aren’t totally the same, so the need to learn the nuances of the business are important both for the knowledge, and as a model of learning to those who are following.

This fact shouldn’t be lost on your leadership development program or your personal development plan.  Be a learner, learn both broadly and narrowly.

While we can never “know it all”, we will be more successful as leaders when we remain on the path of learning.

We are all defined by our habits, and as leaders this may be even more true.  Because others are watching us...