It happens all over the world, every day.

Josie is a great performer. She is very good at her technical expertise, and for that she is rewarded with a promotion.

Her supervisor calls her into her office and gives her the good news. Congratulations Josie, you are now the supervisor!

Excited, perhaps surprised, and maybe a bit scared, Josie smiles and walks out knowing that her life is about to change — she just doesn’t know how much.

There are many parts of this story for Josie, both before and after she begins. There are transition challenges, relationship changes, and much more. But the paradox she struggles with daily, perhaps without understanding it fully, started with how she was selected, and is the focus of the rest of this story . . .

Josie, like so many others, got promoted precisely because she was good at her previous job. The promotion is seen by management as a reward and a vote of confidence, and while it wouldn’t be presented to her this way —as the best option —management certainly doesn’t want to promote people who aren’t doing as well in their current job.

The paradox begins with the fact that Josie isn’t being promoted to just one job. Yes, there is one job description and one title, but the role is more complex than that. Regardless of the words and descriptions used, here’s what her new job really is.

Manager. Josie will have management responsibilities. These generally include responsibilities around forecasting, planning, budgeting, monitoring, managing processes and communicating around these important activities.

Admittedly, these two roles are interconnected, yet they are fundamentally separate too. One role is focused on resources and things, the other on the people and helping them succeed. Think about it like this diagram. 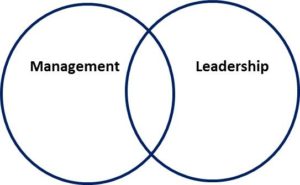 As if it weren’t enough, since most if not all of these roles and the skills and experiences required to succeed in them aren’t in Josie’s toolkit on day one, this still isn’t her full job.

She likely isn’t a full-time manager/leader (regardless of what the job description says); she still has other work to do too. It is likely she still has responsibilities more closely connected to her past comfort level and expertise (using the skills that got her the promotion in the first place. In reality, her new job looks more like this: 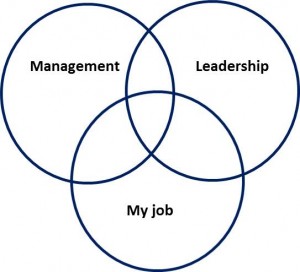 It’s no wonder that leaders feel like they have too much to do!

And inside the three circles, the paradox emerges.

The third circle is where she is most comfortable, has the most experience, and led to her promotion in the first place. It is safe to say that these are the things she will gravitate towards and focus on isn’t it? Human nature says yes.

The fact is, she will be viewed as successful more by the top two circles —the ones she is least prepared for — than for the bottom circle.

To compound her challenge, the bottom circle will, on most days, feel like where the real work is. Unless there is a budget due, a performance review to complete, or a problem with her team, the urgent work will always seem to fall into the third circle.

Unless we are very disciplined, and have a clear focus, the urgent will always trump the important.

So how does Josie, and leaders like her (i.e. you) overcome this paradox?

It starts with awareness which I have hoped to raise with this piece.

It continues with a redefinition of full job, illustrated by the diagram above.

And it concludes with some specific action steps:

As you know and Josie will find out, these four steps aren’t necessarily easy and they can be done. They are the clear stepping stones to her (and your) success as a leader.

The Rational Optimist: How Prosperity Evolves

This week's Resource Recommendation is The Rational Optimist: How Prosperity Evolves by Matt Ridley. Read the newspapers and magazines of...