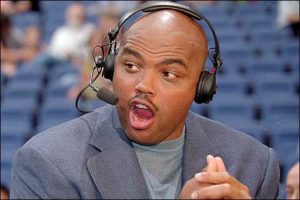 It was a typical business trip. I’d spent the day training a group of people from inside an organization. After the training, I was invited to join the group for dinner. After a lovely dinner, a couple of the participants had some additional questions about the training and how to apply what they were learning. They asked me to join them in the hotel bar, which I happily agreed to do.

The hotel was the Four Seasons in Atlanta, Georgia and it was early December. The bar wasn’t full, but it wasn’t uncomfortably empty either. When we sat down, we noticed that there was a famous person among the patrons.

If you don’t know, Charles Barkley is a former basketball star who was (and is) an NBA analyst for the Turner networks based in Atlanta. Charles is a big man. While not tall by professional basketball standards, he was called “the Round Mound of Rebound” – an acknowledgement to his size and presence on the basketball floor.

As the participants and I visited, you couldn’t help but notice Charles — and not just for his size. It was abundantly clear that interacting with Charles wasn’t like interacting with most people, certainly not most celebrities. It didn’t matter who came up to talk to Charles, he was gracious. He listened to the person intently. But he did more than just listen.

I watched Charles more intently after the questions at my table had been answered. In fact, we all began to study the behavior of Sir Charles. Each person he interacted with — staff, patrons of all ages, fans, and others all received the same treatment — his total, 100% focus and attention. He did this consistently with everyone he interacted with for over an hour (and no, it wasn’t just with the attractive women in the bar).

Charles Barkley was totally present in his interactions with each person. Being totally present is something beyond listening. It means clearly and intentionally focusing on the other person. It also means:

Yes, you are doing all of those important active listening behaviors. But being present goes beyond those tactics, because your intent focus shows that you are with that person completely.

Few behaviors in the world are more powerful, memorable and persuasive.

Before I left the bar, I decided to introduce myself to Charles and give him feedback on what I had been observing. I experienced the same presence I had been observing, and received genuine thanks and appreciation for the feedback.
Charles famously made commercials for Nike where he said athletes shouldn’t be role models — that that wasn’t his place. I can tell you with certainty, that when I want a role model for being totally present with another person, Charles is one of my role models.

The experience and lesson I received from Charles that night is worth far more than the autograph I didn’t ask for. Charles was a living, breathing example of a powerful personal influence truth: We don’t have to speak to influence others. In fact, not speaking and truly listening sends an important message — that you care about others and their ideas, and that you value, appreciate and respect them.

Mastering the Rockefeller Habits: What You Must Do to Increase the Value of Your Fast-Growth Firm

Today's Resource Recommendation is Mastering the Rockefeller Habits: What You Must Do to Increase the Value of Your Fast-Growth Firm...