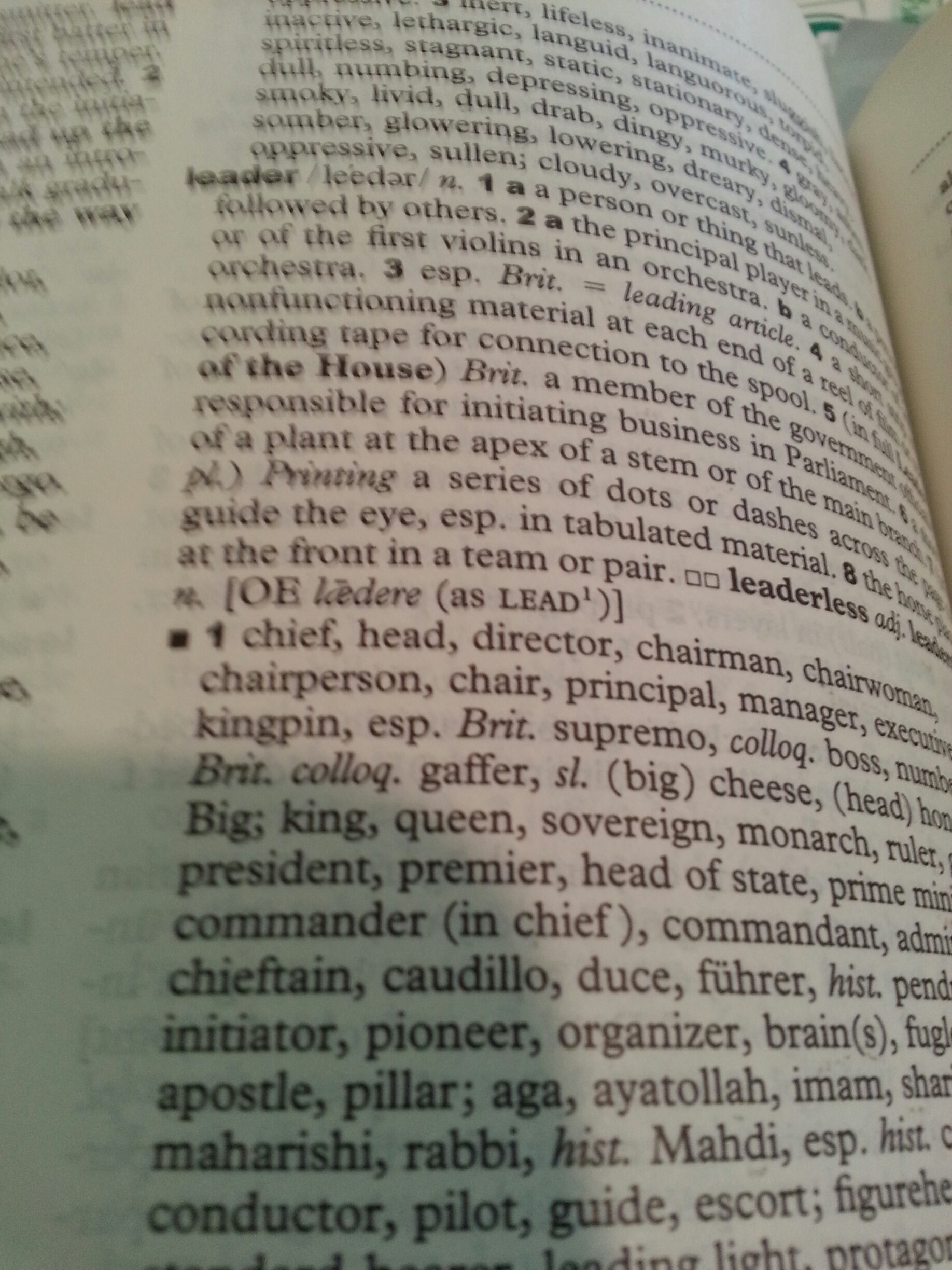 One of the most treasured and used books on my shelf is my thesaurus. It sits next to a Dictionary, and I’ve used both often since college. Even though I now use thesaurus.com (including today), I often find myself looking for a synonym to help me communicate (or even understand) an idea better.

I got to thinking about my thesaurus when I read that today, in 1852, Peter Roget published his first thesaurus. Then I looked up leader, a word I use often.

This article started with that idea, and it will unfold based on my observations of the synonyms for this word.

Since the word leader has different definitions, different groupings of synonyms can be found. (You can go read to your heart’s delight here.) The list that follows comes directly from Thesaurus.com, as of 4/24/13 for the first listing for the definition – a person who guides.

The words fall into several categories, based on my perception. I think there are some interesting lessons in these groupings. Here is how I would group them (this is only my grouping, you might do it differently, and some words could go in multiple groupings):

Words I don’t know how to group at this moment! forerunner, harbinger, lion, mistress, rector, ringleader.

Here is what I take from this exercise I’ve done in front of you.

Words matter – and while all of these words, from a lexicographers perspective are synonyms – the actions we would take and the way we would view our role might change drastically based on the words we pick to describe it.

Here is a quick example: Would you act differently as a “leader” if you see yourself as a pacesetter versus as a doyen (the senior person in a group)? Definitely! So what words are you using to describe your role and work as a leader? Those words matter. In this case the words matter a lot, because they become labels of definition.

Context matters. There are words that could have fit in multiple groupings – President could easily go in the government list, superior could have been in the military list, as two examples. Why does this matter? Because the same word in a different context conjures different images and behaviors.

Who matters. So far I have commented based on which words you would use for yourself, but what about the labels your team uses and your boss uses? If you call yourself a captain, does that mean the same thing to everyone?

Leadership is complex. Whew. If you didn’t already realize it, leadership is a complex set of skills and behaviors. Thinking about this list of words certainly is a reminder and perhaps further illuminates that idea for all of us.

I’ve built this article based on the exercise I did for myself. I believe there are several ways you could use these ideas to help you grow as a leader. Here are a couple to get you started.

I hope this article has been interesting for you to read – I certainly learned a lot by writing it! More than that, I hope that you think about it and do at least one of the four things I’ve suggested.

Thanks for reading, and thanks to Peter Roget for inspiring this article over 160 years ago.

Contagious: Why Things Catch On

By Jonah Berger If you are a marketer, you might want to know how to make your YouTube video go...