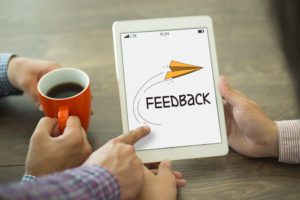 Feedback says as much about us (the giver) as it does about the receiver.

I say this often, and many times people look at me funny. After all, the feedback I give you is about something you did – your behavior or performance – and isn’t about me at all, right?

Not so fast my friend.

Let’s say you have been promoted to lead people who do a job you used to do. When you give them feedback, it is nearly impossible for you not to see their performance through the prism of what you see as success. You got promoted for your expertise and ability to do tasks, and so you know how to do those tasks well.

As you review someone else’s performance, won’t you be considering how you would do it and what parts you view as most important?

So, in that moment isn’t your feedback about more than just their performance?

If you have ever watched a law drama on TV, you have seen the following situation:  Two people are called to testify as witnesses to a crime, and their testimony isn’t exactly the same. They witnessed the same event, but didn’t see the same thing.

Does this mean one of them is lying?

But, just as likely, since we witness things through our own filters, both were reporting what they saw and remembered, based on what is important to them. In this instance, like the one I’ve already described, the reporting isn’t simply about the events, but about how the observer (i.e. giver of the feedback) saw, digested, and interpreted it.

All of this means that while your experience and perspective matters when giving feedback, to be most successful (and truthful), you must recognize your perspective for what it is, and not 100% “truth.”

When you know this and apply this in creating and delivering your feedback, it will be more helpful and more readily accepted and applied by others.

Make sure you are giving feedback that is more observation and less judgment.

Make sure that you recognize your filters and consider the behavior more broadly than just from your perspective.

Remember that your perspective, while valuable isn’t the only one that matters.

It’s a different take – a more subtle thought about giving feedback than perhaps you were expecting, yet when you realize this important fact about the feedback you give, you will become a more effective coach to others.