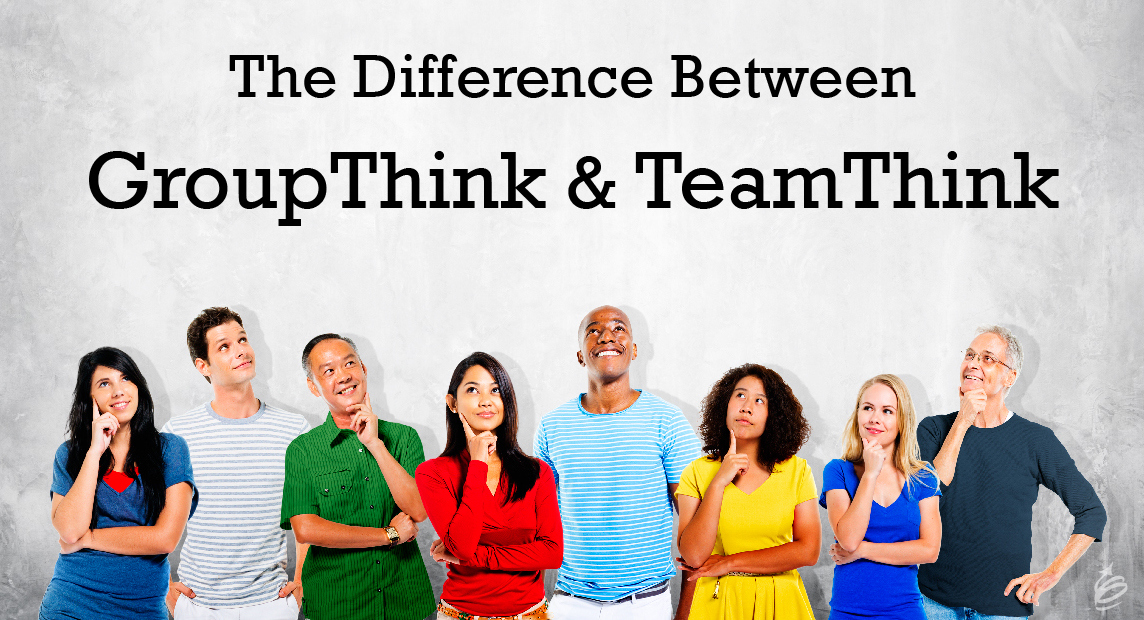 Chances are you have heard the phrase “groupthink” and if so you have a justifiably negative feeling about the idea.

Chances are probably even better that you haven’t heard the phrase “teamthink”, and that is the point of this article.

The word and idea of groupthink was popularized in the early 1970’s based on a book by Yale psychologist Irving Janis. Here is his influential definition, in part (with my emphasis for our purposes).

“I use the term groupthink as a quick and easy way to refer to the mode of thinking that persons engage in when concurrence-seeking becomes so dominant in a cohesive ingroup that it tends to override realistic appraisal of alternative courses of action . . .

The main principle of groupthink, which I offer in the spirit of Parkinson’s Law, is this: The more amiability and esprit de corps there is among the members of a policy-making ingroup, the greater the danger that independent critical thinking will be replaced by groupthink, which is likely to result in irrational and dehumanizing actions directed against outgroups.”

If I may simplify this a bit, and connect it for our uses, no leader wants people to gain agreement so quickly and firmly that the group doesn’t look at the options available to them. And while wise leaders will want high levels of connection, trust and esprit de corps among their teams, they don’t want to threaten independent critical thinking.

That, my friends, is the trade off – we want to build a connected, engaged team, and yet we want to make sure we are considering options and making sure everyone’s opinions are heard and considered.

In other words, we don’t want groupthink.

I propose that what we do want is teamthink.

Teamthink builds on the relationship portion of the groupthink phenomenon, without the dangerous implications, ignoring options or devaluing independent thinking. Here is my simple definition of teamthink.

Teamthink is the collaborative thinking that comes from people who care about each other and their goal enough to listen carefully, consider options and make the best decision for themselves and those they serve.

The way to get what you want without the risks, starts with you as a leader. To reduce the likelihood of groupthink, start here:

The Goal to Galvanize

First, you have to make the goal clear and meaningful. When the team has a shared and mutually understood goal and a purpose that is greater than themselves, you have set the stage for success. But this alone doesn’t reduce the chance for groupthink.

The Relationships to Bond

Next you must foster the development of strong working relationships. People do not have to be friends in order to have an effective team, but there needs to be a level of commitment to each other and caring for each other. As those things grow, we can reduce the challenges of groupthink, but that still isn’t enough.

The Trust to Create Safety

Goals and relationships can still lead to groupthink, but the rejection of independent thinking and the rush to agreement comes often because people don’t feel safe in sharing ideas that might be controversial; worrying about the reaction of other team members of the leader. As leaders, we must make it a priority to cultivate and grow trust between team members and with ourselves. This will create a safe place for people to listen, share, and be heard – whatever the topic or idea. Then we must lead by example, allowing new opinions and ideas to get their full chance to be heard and considered.

If you want to move past groupthink to teamthink, you must have all three of the components above; any two of the three won’t get you where you want to go.

There is a difference between a group of people and a team; and similarly, there is a difference between groupthink and teamthink. As a leader it is your obligation to your organization, those you lead and those you serve to create true teams; people who are able to move past groupthink and make real decisions based on real conversations – and to create better results.

Teamthink is your goal, now make it your reality.