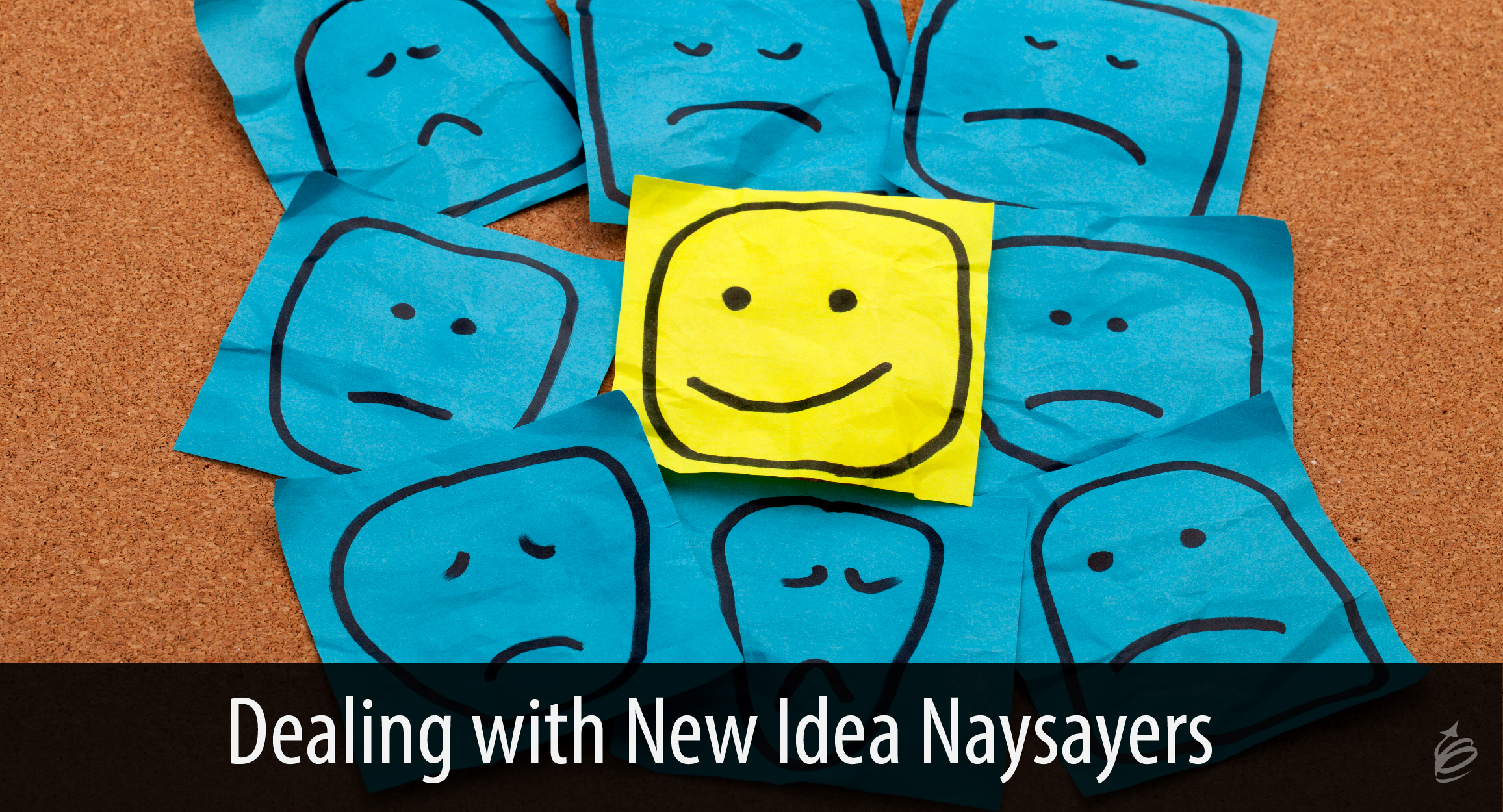 You’ve been there. A new idea is floated, a change is introduced, or a solution to a vexing problem is suggested and the responses include:

“That will never work.”

If you have worked in an organization or led in any capacity, you have heard the new idea naysayers. These comments can be cynical, deflating, and energy draining, so the question is how do we deal with those comments?

Before we deal with the comments themselves, let’s talk about why they occur.

First off, the title of this article, while hopefully clever, isn’t really accurate. If you focus on the person (e.g. “they” always respond that way), you won’t look further or have a productive way to respond. It isn’t really about a person – it is about their comments.

Why do people respond in these negative ways? Here is a partial, but useful list.

It is a habit. The initial negative comment is some people’s habitual response to something new or different. This doesn’t necessarily mean their resistance can’t be overcome. Their comment might put a damper on the energy of the group (and we will talk about that below in Solutions), but recognize their response may only be a conditioned response. One reason people do this out of habit is that they have found it works in reducing the amount of change they face, which leads to the next point …

They are scared. One reason people respond to new ideas negatively is that they are scared. The future would be different than the present and that can be scary. They may know how things work now, and with change, maybe it will be harder. Change can be scary, and that will be true even if others aren’t scared as much as the person making the negative comment.

It is what they (really) believe. Not habit, not scared, they may be stating the truth as they see it. They may think this is a bad idea, that it won’t make things better, that it really won’t work. If that is their view, do we really want to squelch that input?

They misunderstand the situation. This is connected to the last point. They may not like the idea, but from your perspective, they may not fully grasp or understand it yet. When you recognize that sometimes the negative comment is nothing more than a lack of awareness, your response will be different, and likely more effective.

They are trying to reduce risk. Some people have a gift of thinking past the initial idea and seeing the impacts of that idea. Often these people move past “yes we can do that” immediately to “here are my concerns” or “these are things we will need to address” (and perhaps they don’t know how to address them yet). Again, that perspective is invaluable, and while we might coach them on how to share those concerns, we definitely want that information!

Once we realize that the cause of their negativity could come from many sources, we are in a better frame of mind to respond more effectively to their comments. Specifically, here are some strategies to help you do that.

Let people talk. Too often, leaders see the negative comments as a problem and try to shut down or minimize that person’s input. Now that you think about the sources above, you really don’t want to do that. Let people share their concerns. Ask questions based on the ideas above to determine the source or cause of their negativity. Even if it is mostly venting, let them get their thoughts, feelings, and concerns on the table.

Value their input. When you let people talk, value them and their message by listening to them and thanking them for their input. You do not have to agree with them to do those two things.

Learn their perspective. Use the time they are talking to understand their perspective, their concerns and more. You will likely learn something, and will be in a better position to respond to them then.

Ask a different question. After you have done the first three suggestions on this list, flip the script. For example, if someone says, “we can’t make that work,” ask the opposite question “How could we make it work?” After hearing their input, ask them to look at the other side of the conversation. This will usually put some energy back in the room and allow that person (or the group) to focus on overcoming the concerns and obstacles that have just been identified.

Provide some coaching. As a leader, when considering the sources above, you will see there may be some coaching opportunities. If that is the case, outside of the moment, give some coaching on how someone could communicate more effectively in those situations. As just one example, if it is a habit, the person may be unaware, and your coaching could be seen as valuable.

Regardless of the title of this article, it isn’t about the naysayer, it is about the comment and its impact. When you stop to consider the potential source of the comment, you put yourself in a much better position to respond more effectively.

If you struggle with negativity more broadly than this, you might consider downloading my webinar titled Overcoming the Negative Attitudes of Your Team and Those Around You. You can learn all about that here.

Memory Rescue: Supercharge Your Brain, Reverse Memory Loss and Remember What Matters Most

by Daniel G. Amen, MD For some, memory loss is a punch line, or even an excuse. But for many,...